What Changes Umrah Brings in Life 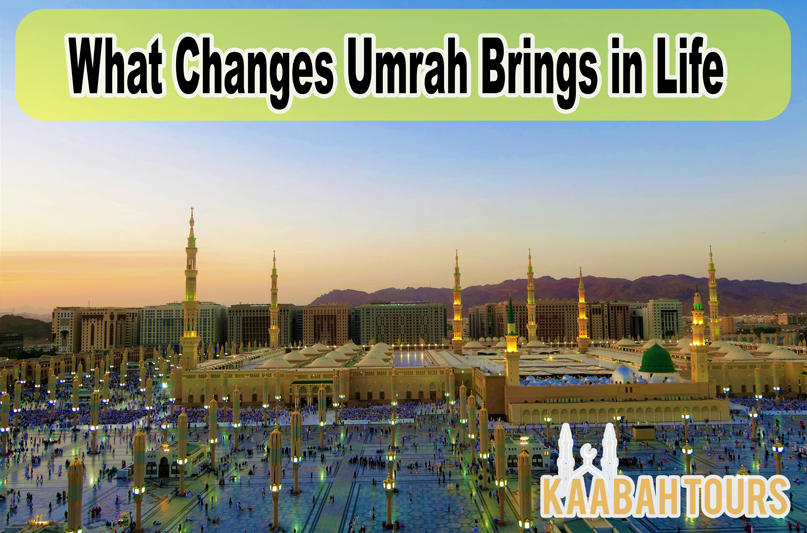 Everyone in this world is in pursuit of peace and solace. People have their different needs and because of those needs, they travel around the world to fulfill them. The world can be divided into two types’ temporal world and eternal world. The temporal world consists of the worldly materials and our everyday needs and other things but the eternal world is such kind of world which is immoral. People who secure their eternal world are the luckiest one because that world would never end. The sufferings for misdeed and reward for good deeds are measured in that world. Umrah is one of the basic principles of Islam, it is a religious pilgrimage to Mecca and it is carried out by all the Muslims in the world. Umrah means to complete the circles around Kaabah and Sai which are located between Marwah and Safa. Several rules and regulations are there to be performed by Umrah and Muslims are bound to follow all these conditions.

Umrah holds paramount importance in our life.  Success, failure, achievement, happiness, and sorrows are the worldly achievement in Muslim’s life but the true and biggest achievement is the peace in the eternal world. However, Umrah has brought the changes in the life of all Muslims a lot.

Performing Umrah is an act of submitting yourself to God and this act gives you satisfaction and peace. We perform Umrah so that we can be in peace and prosperity in our life.  Actions speak louder than the words and our actions in daily life define who we are and what status we hold.

Those who are capable of performing Umrah spend a lot of money on it. The person who performs Umrah become sacred of all sins and he becomes the example for the society by his deeds. However, their money is alternatively used for the betterment of poor people and this can alleviates poverty. Similarly, Performing Umrah also shields the Muslim from poverty because they are spending their time, knowledge and also wealth in the way of ALLAH. Umrah separates poverty and adds peace in human’s life. The money is used by the government for different purposes, for instance, they establish charity organizations and those charity organizations work day and night to help suppressed people in their surrounding and in the world as well. This kind of activity also spreads the passion for spending money to eradicate poverty from the world and to make it a peaceful planet. Those who are capable of spending money on Umrah and in spite of it they are not spending the money on performing Umrah in their life are the most ill-fated people.

Get happiness of God

The strong bond between a human being and God is inevitable. It is as strong that no force in the universe can break it or harm it. To maintain that strong bond Muslims perform Umrah and they always want to please God, the Almighty Allah. The performance of umrah is such an act that can be acted to please God. The basic thing in Muslims life is to create a strong bond with God and to seek forgiveness and always work well to have a place in heaven.  However, as Allah adores those who are struggling in their life and always in pursuit of something better. Umrah is the platform where one’s call can be answered and bestow his blessings on them. During the journey of Umrah, every moment God multiplies the rewards of the person because God loves seventy times more than a mother loves her child. So we can imagine how much the bonding is strong. By performing Umrah we also seek forgiveness and mercy from our God.

Umrah is not only the opportunity to please God and to gain peace but it is a great chance to eliminate and clean up one’s sins and the consequences of mistakes done in the past intentionally or unintentionally. Performing Umrah is the act of purification from every misdeed and purifies our soul, mind, and heart.

With a different color, race and different nationality, people from different parts of the world come together on one plate form to perform Umrah, this leads to the acceptance of diversity and Muslims have no priority on the basis of color, creed and wealth but God only loves those who are pious and contribute to humanity.  This is the platform which creates brotherhood and unity among the Muslim’s of the whole world. They come to know about their sufferings and their sorrows and they always try to be the painkiller of each other.

It is important to keep all the necessary items along after that we can proceed with this heavenly journey with all happiness. For making your Umrah journey possible, choose Kaabahtours.co.uk and book your Umrah packages 2019 today.