Performing Hajj is Obligatory for all Muslims 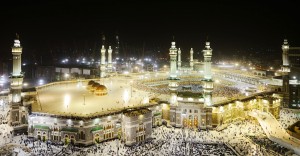 Hajj is striving in path of ALLAH Almighty, relinquishing worldly comforts and luxuries, abstaining from worldly desires, accomplishing rituals to give a boost to the bond with divine creator ALLAH Almighty. Hajj is the 5th most basic pillar of Islam, which honour numerous sacramental ceremonies that symbolize the necessary vitalities of Islamic belief. Among all 5 significant pillars of Islam, Hajj holds whole ingredients for all Muslim to revitalize one’s iman (faith) in order to achieve the level of distinction in sight of ALLAH Almighty.

And complete the Hajj and ‘umrah for ALLAH. But if you are prevented, then [offer] what can be obtained with ease of sacrificial animals. And do not shave your heads until the sacrificial animal has reached its place of slaughter. And whoever among you is ill or has an ailment of the head [making shaving necessary must offer] a ransom of fasting [three days] or charity or sacrifice. And when you are secure, then whoever performs ‘umrah [during the Hajj months] followed by Hajj [offers] what can be obtained with ease of sacrificial animals. And whoever cannot find [or afford such an animal] – then a fast of three days during Hajj and of seven when you have returned [home]. Those are ten complete [days]. This is for those whose family is not in the area of al-Masjid al-Haram. And fear ALLAH and know that ALLAH is severe in penalty.

Hajj is considered to be one of the most important religious deeds for all the Muslims around the globe. Every Muslim has a dream to visit holy Makkah, perform namaz and worship ALLAH Almighty and to ask forgiveness for all the committed sins and live a superior life ahead.

Pilgrim who performs Hajj by travelling all the way to visit Holy city Makkah is special guest of ALLAH Almighty and ALLAH take cares of His matter enthusiastically. Hajj is the essence of divine teachings of Quran and Islam that expiates and wash away all the sins when perform with devoted and pure niyyah (intention) for sake of ALLAH Almighty.

ALLAH Almighty has declared the practices and rituals of Hajj, it an obligation on every person who is;

Hajj is the heavenly and the religious ritual that every Muslim has to perform once in their lifetime. Hajj means that people require making a visit to the holy Makkah. It is considered as the most blessed pillars in Islam.

kaabahtours.co.uk is one of the authorized Hajj and Umrah travel agent based in UK offers a range of Cheapest Umrah Packages from UK.